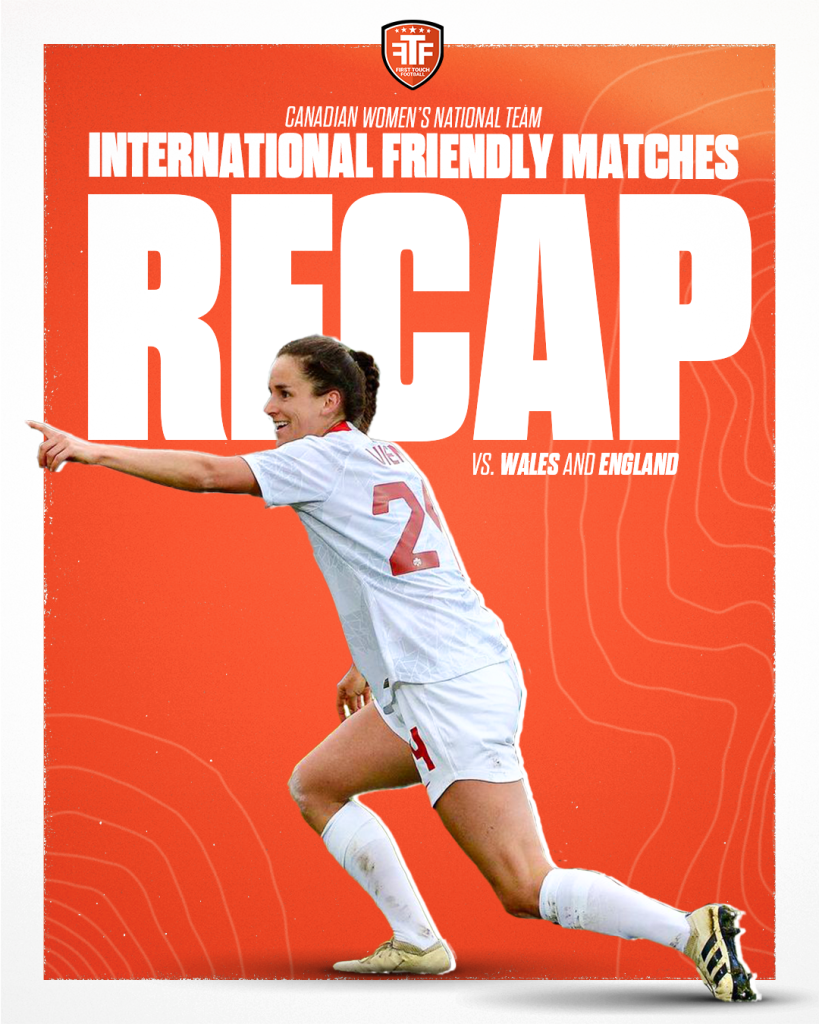 After a convincing 3-0 victory on April 9th against Wales, The Canadian Women’s National Team picked up where they left off in their matchup against England on April 13th. Canada was able to defeat the highly ranked English side 2-0 to conclude their ten day April training camp in preparation for the upcoming Tokyo Olympics.

Forward Evelyne Viens proved to be a difference maker after being brought on as a substitute in the game against Wales for Christine Sinclair, who left the game with an apparent injury. Viens was able to capitalize on a tremendous ball from Janine Beckie, who also made a major impact in the two game set, assisting on two out of the five goals scored from the Canadians throughout the two Friendly Matches. Viens also scored the first goal in the England game, after converting on a mistake from experienced English defender Demi Stokes.

The midfield combination of Desiree Scott, Quinn and Jessie Fleming proved to be the difference maker for Canada in both matches. In the matchup against England, Canada’s midfield did a superb job overloading the opposing midfield and blocking passing lanes which deterred the English side from moving into the final third of the pitch. Scott and Quinn were relentless in their pursuit of loose balls and helped to create free space for Fleming to create offensively. In the game against Wales, Fleming scored a magnificent goal as she found herself on the ball just inside the 18-yard box and was able to curl it into the top right corner to seal the win for Canada.

Canadian Fullback Ashley Lawrence was a force to be reckoned with for the Canucks in each of the last two games. Against Wales, Lawrence started the game at right back and was later moved into midfield to begin the second half. The decision to move Lawrence into the midfield was key for Canada as it helped spark things on the offensive side of the pitch. In a press conference after practice on April 8th, Ashley said “Whatever the game plan may need to be, I’m definitely ready to adapt” when referring to her role in the Canadian lineup. “I think all of the players have that mindset that if we need to be called upon in another position we’re definitely ready” insisting that the team has completely bought into the vision deployed by Head Coach Bev Priestman.

In the game against England, Lawrence spent most of the game battling with talented Manchester City winger Lauren Hemp. Lawrence was able to neutralize Hemp, who is one of England’s most potent attackers, which shows the value Lawrence is able to bring in whatever position she is called upon to play in. “She’s obviously a world class player” said Canadian teammate Janine Beckie, “I think Ashley can play anywhere on the field and be impactful” when referring to the versatility Ashley will bring to the team heading into the Olympics this summer in Tokyo.

Long-time Canadian Captain and all-time International goal scoring leader Christine Sinclair went down with an injury towards the later stages of the first half against Wales. Sinclair, who seemed to be favouring her left leg was able to walk off the field on her own accord. Sinclair sat out of Canada’s next game against England but she should be available to play in future matches for the Canucks.

Goalkeeper Stephanie Labeè looked strong in both matches and was seen as a vocal leader for the Canadians. Labeè was able to secure two clean sheets throughout the two Friendly matches to record her 33rd and 34th clean sheet with the red and white.

The game against England was the final competition to be completed in the ten day April training camp for the Canadians led by Head Coach Bev Priestman. If these games were any indication of what is to come, Canadian soccer fanatics have a lot to be excited about heading into the summer Olympics in Tokyo.