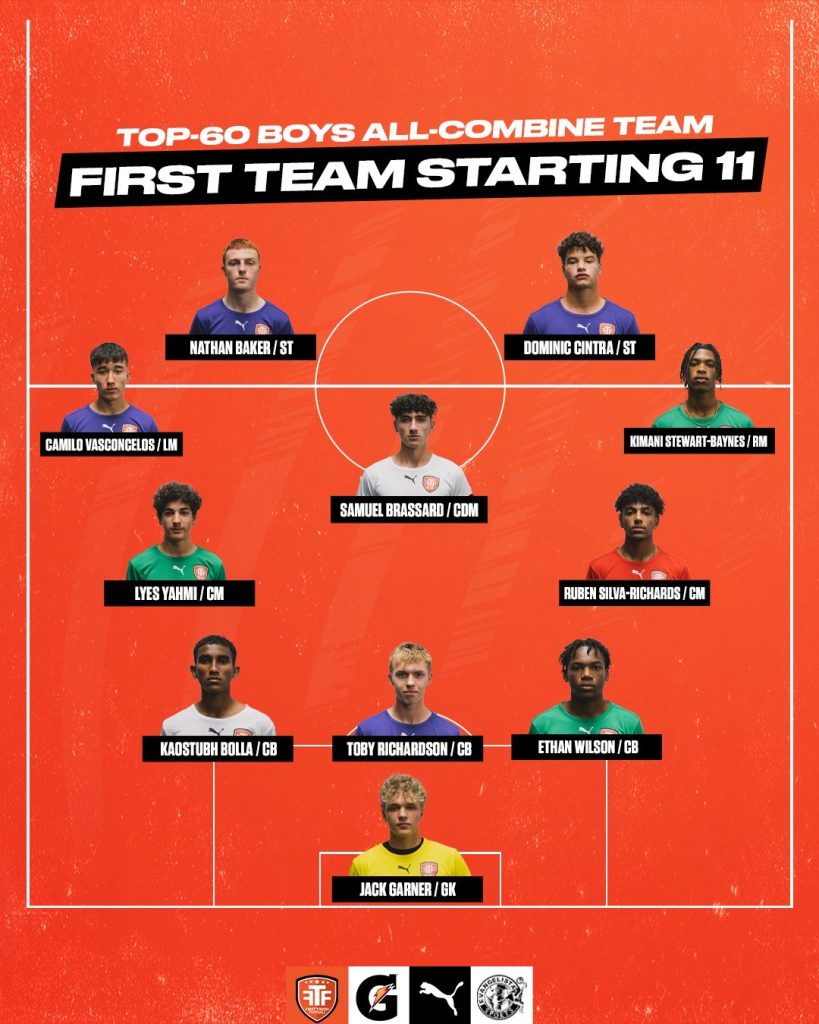 GK – Jack Garner (2023 Grad): The Vancouver Island Wave goalkeeper was sensational throughout the event. Most notably, Garner helped Team Evangelista reach the Championship match after producing numerous fantastic saves, sending the game to penalties, in which he saved the lone missed penalty shot.

DEF – Ethan Wilson (2023 Grad): The Dero TFC product was a rock at the back for Team Evangelista throughout the entire event. Wilson showed an impressive blend of aggressive tackling and measured defensive positioning allowing him to win different types of duels consistently.

DEF – Toby Richardson (2023 Grad): West Ottawa SC’s central defender was a steady presence in the back for Team Gatorade during the event. Richardson’s positional awareness was on full display as he broke up numerous opponents’ attacking threats by intercepting passes and clearing crosses.

DEF – Kaostubh Bolla (2023 Grad): The North Toronto Soccer left-back was phenomenal throughout the event for Team Puma. His situational awareness was on full display as he was a presence defensively and offensively throughout. His technical ability was also noticeable, culminating in a sensational free kick goal in his last game.

RM – Kimani Stewart-Baynes (2023 Grad): The Vaughan SC product was electrifying throughout the event. Stewart-Baynes is supremely athletic, not just over long distances, but is incredibly shifty and quick in tight spaces. He also has phenomenal technique and ball retention skills which make him a constant threat of any team he faces.

CM – Lyes Yahmi (2023 Grad): AS Laval’s central midfielder was a focal point in his team throughout the tournament, consistently putting in fantastic performances. Yahmi controlled the tempo of his team while impacting the pace of play by breaking the other team’s defensive lines by dribbling, short passes, and long-range passes.

CM – Ruben Silva-Richards (2022 Grad): Silva-Richards used his natural athleticism throughout the event, gliding across the pitch both with and without the ball. Additionally, he possesses fantastic technical ability and can use both feet with ease dribbling, passing, and striking the ball. Silva-Richards is also comfortable playing in tight spaces using his intelligence to solve problems.

CAM – Samuel Brassard (2022 Grad): The Lakeshore Senior AAA product was a creative force throughout the entire event for Team Puma. While he consistently found time on the ball in between the lines, Brassard was also able to find very good outlet passes in tight spaces that put his team on the front foot. Unsurprisingly, he led the event in assists with 3.

LM – Camilo Vasconcelos (2023 Grad): Guelph United FC’s shifty winger was sensational during the tournament. Vasconcelos was one of the best attacking talents at the event as his technical ability and positional savvy allowed him to consistently find dangerous space and produce a phenomenal end product.

FWD – Nathan Baker (2023 Grad): The Vaughan SC attacker scored in every single game, registering a staggering 5 goals and 1 assist in four games culminating in being named MVP. Baker is a direct player who looks to get in behind defenses and drive straight towards goal. His movement in the box is what sets him apart as he’s always able to find open spaces.

FWD – Dominic Cintra (2023 Grad): North York Academy’s 6ft1 striker was an imposing presence throughout the event for every opposition’s defender that faced Team Gatorade. Cintra possesses a unique blend of brute strength that allows him to hold off defenders and acute technical ability which allows him to get shots off or link up with teammates in tight spaces.