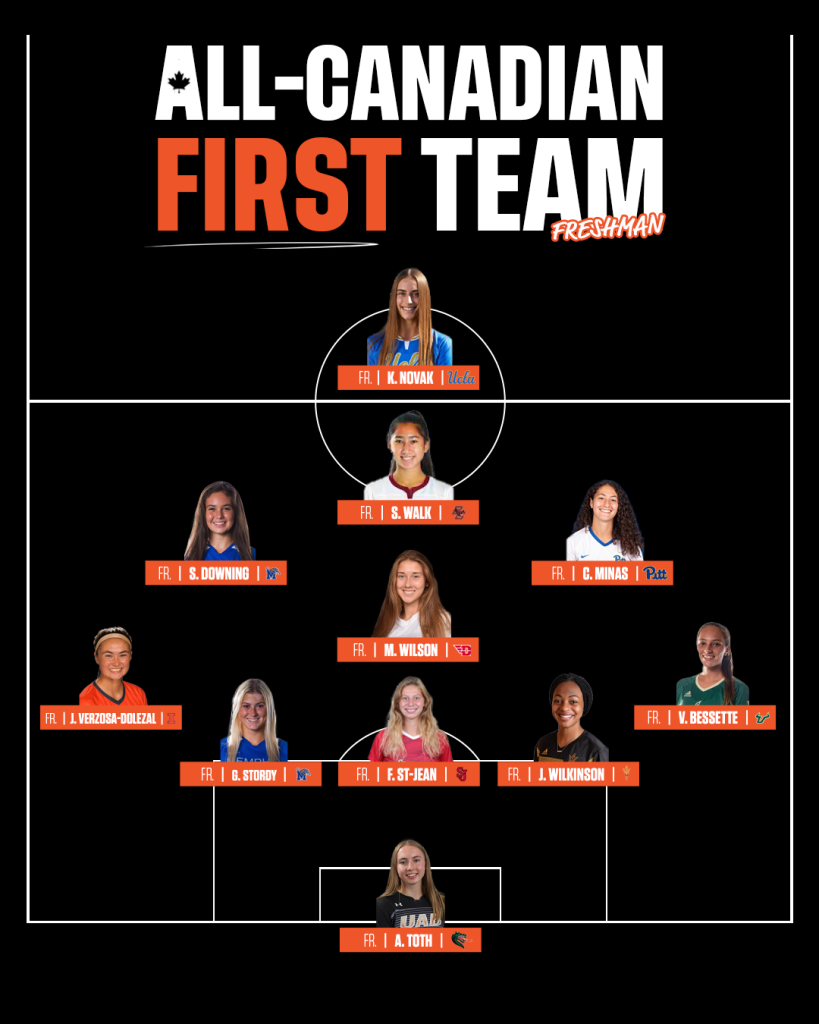 Canadian net minder Anika Toth was an influential force in goal for the University of Alabama at Birmingham. The Oakville, Ontario native tallied twelve starts for the Blazers in 2020/21 completing forty-two saves, three clean sheets and a 1.02 goals against average on the season.

All-AAC First Team Selection Vivianne Bessette looked like an established veteran in her rookie season. In her first career NCAA game on February 7th, Bessette recorded a goal and an assist in A 3-0 win over FAU. In twelves starts in her Freshmen season, Bessette registered three goals and two assists to complete a productive year for the Freshmen defender.

Frederique St-Jean from Montreal, Quebec played a major role on defence for St. Johns in 2021. St-Jean was as sturdy as it gets on the back-line, while also scoring the golden goal in a 1-0 overtime victory against Villanova to add to her tremendous defensive efforts.

American Athletic Conference Rookie of the Year Grace Stordy is a rising star in Canadian soccer. Stordy started twelve matches for the Tigers this season adding three goals and one assist as a Freshmen. The Canadian Defender was named to the All-AAC First Team in her first season in the NCAA.

We knew Joanna Verzosa-Dolezal was destined for greatness after capturing B.C Soccer Player of the Year in 2019/20 and she proved her worth in her first campaign with Illinois. Verzosa-Dolezal was selected as a member of the All-Big Ten Freshmen Team after staring in twelve games for Illinois this season and helping the team record four shutouts.

Montreal, Quebec native Chloe Minas was cool, calm and collected in the middle of the pitch for Pitt in her first NCAA season. Minas added two assists in sixteen games played helping Pitt to an impressive 11-5-0 record in 2020/21.

Dayton definitely found themselves an absolute gem in Midfielder Madison Wilson. The Freshmen from London, Ontario made fourteen appearances on the year for Dayton recording three goals and two assists to finish with a tally of eight points. Wilson was selected as a member for the Atlantic Ten All-Rookie team for her phenomenal efforts in 2021.

Memphis University loves their Canadian athletes and Stella Downing is the next great Canadian to come through the pipeline. Downing dominated the field for twelve matches in her Freshmen season, adding two assists and four shots on goal. The Vancouver, British Columbia product was a member of Team Canada at the U17 Concacaf Championship where she earned a bronze medal.

Former Captain of North Toronto SC OPDL side that won the league title in 2017, Sonia Walk fit perfectly into the lineup at Boston College in her Freshmen season. Walk played in fourteen games for the Eagles in 2021, starting thirteen of them and adding four shots on goal.

Pac-12 All-Freshmen Selection Kaila Novak was big piece on offence for the Pac-12 Champion Bruins. Kaila started ten of fourteen games played and contributed a goal and three assists to a very strong UCLA side. UCLA is in good shape with Kaila leading their offence for many years to come.

Canadian Goalkeeper Anessa O’Brien was solid in her two starts for Jacksonville State University. O’Brien made five saves in her two starts in her Freshmen season. O’Brien is one of those players who will only get better with more time on the pitch.

Former Team Ontario Captain Bella Hanisch made a difference as soon as she took the field at Depaul University. Hanisch had one assist to go along with her solid defensive presence in her five games played in 2021. Hanisch is more than just an athlete, as she plans to major in finance during her time at Depaul.

All-SWAC Tournament First Team selection Maya Joy-Thompson was an impactful force in the midfield for JSU in her Freshmen year. Joy-Thompson recorded three goals and one assist on her first season with the Lady Tigers. The Midfielder from Toronto, Ontario finished third on the team in scoring in 2021.

Midfielder Emily Penney from Cambridge, Ontario was terrific in her first college season with Oakland University. Penney made eight starts in 2021 for the Golden Grizzlies helping Oakland to four wins in her Freshmen season. Penney was selected as member of the Horizon League All-Freshmen for her great play in the midfield this season.

Another Cambridge, Ontario product Harper Bennett made a name for herself in the midfield in her first year with Jacksonville State. The Gamecocks should be delighted to have Bennett grace their midfield for the next three seasons.

Freshmen Chantelle Parker stepped on to the pitch fourteen times in her first season as a Panther. The Milton, Ontario native helped Pitt capture nine wins in her fourteen appearances and added an assist in the Panthers 4-1 victory over Navy on November 11th, 2020.

Vancouver, British Columbia product Aleisha Ganief was a mainstay up top for Iowa in her first collegiate season. Ganief logged 1126 minutes in 2021, as she helped Iowa close out the season on a five game winning streak as they move forward into next season.

Future Health Science major Serita Thurton was a key piece of a very strong South Florida squad in 2021. Thurton made twelve appearances for the Bulls this season recording one goal and one assist while helping USF to ten wins in her twelve matches played.

Former Aurora FC Forward Courtney Chochol was able to produce results as soon as she touched the field in her first season with Quinnipiac. Chochol appeared in nine matches for the Bobcats in 2021, finding the back of the net on two separate occasions and helping the team to four victories.