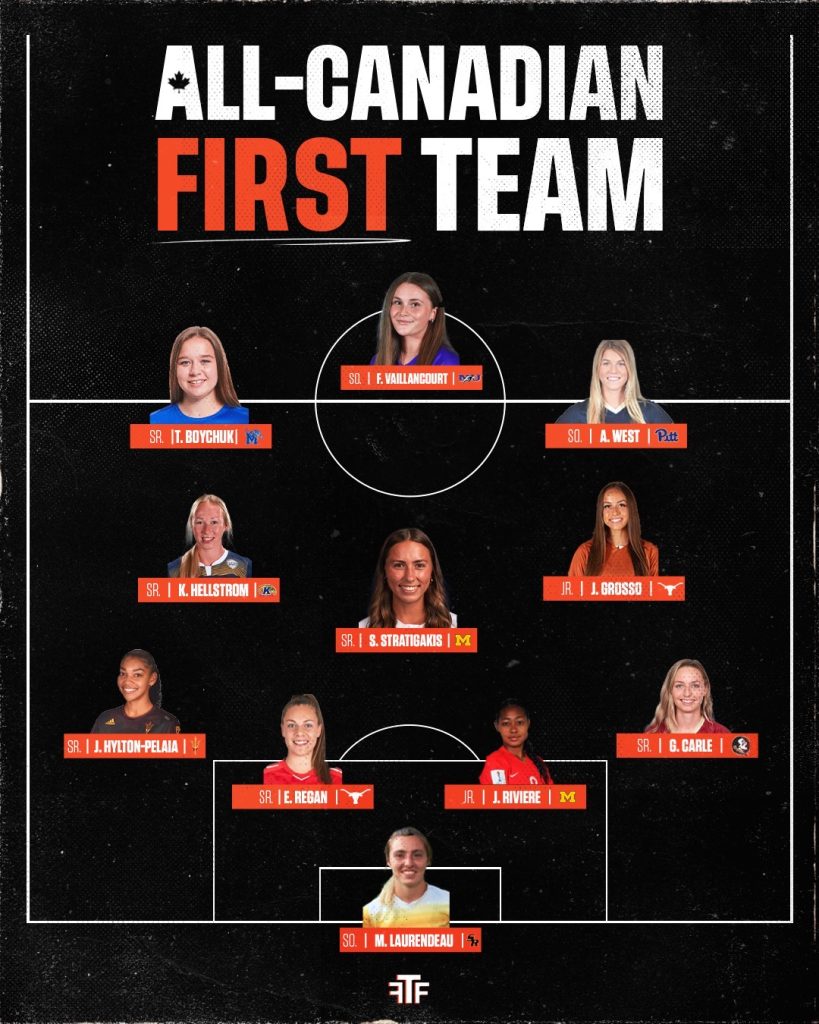 Defender: Jayde Riviere, University of Michigan: Riviere registered 1 assist in 22 games, 19 of which as a starter. A stalwart at the back, she helped Michigan to 11 clean sheets and a BIG10 Championship.

Defender: Gabrielle Carle, Florida State University: Carle played and started in 23 of FSU’s National Championship season recording 1,908 minutes. She was instrumental in helping FSU to a 22-1-2 record, helping the team to 14 shutouts, while adding 3 goals and 6 assists.

Defender: Jayda Hylton-Pelaia, Arizona State University: Hylton-Pelaia started 16 of ASU’s 20 games in 2021, featuring in 19. She scored 1 goal as well as pitching in with two assists while helping ASU to a 10-8-2 record. Hylton-Pelaia was selected 49th overall in the NWSL draft by Chicago Red Stars.

Midfielder: Sarah Stratigakis, University of Michigan: Stratigakis scored 2 goals and chipped in with 5 assists helping Michigan to a 18-4-3 record and a BIG 10 Championship. For her stellar season, Stratigakis was named to the All-BIG 10 2nd Team and earned All-North Region 2nd Team honours.

Midfielder: Karly Hellstrom, Kent State University: Hellstrom was one of the most dangerous attacking players in the NCAA during the 2021 season. The Kent State midfielder scored 7 goals, adding 11 assists. Her season culminated in earning the All-MAC 1st Team and All-Midwest Region 2nd Team.

Forward: Amanda West, University of Pittsburgh: West was once again lethal in front of goal for Pitt in the ACC, scoring 10 goals, including 5 game winners, adding 3 assists. She was named to the All-ACC 3rd Team and the All-Atlantic Region 3rd Team at the end of her season.

Forward: Florence Vaillancourt, Niagara University: Vaillancourt finished the 2021 season with the 13th highest point total in the entire NCAA after netting 13 goals and adding 10 assists. Consequently, she was named the All-MAAC Offensive Player of the Year and an All-MAAC 1st Team.
Forward: Tanya Boychuk, University of Memphis: Boychuk made the most of her senior season earning All-AAC 1st Team and All-South Region 1st Team honours after scoring 6 goals, chipping in with 4 assists for Memphis.

Goalkeeper: Morgan McAslan, Samford University: McAslan recorded 10 clean sheets, 0.79 goals against average, and 0.814 save percentage. She was named to the SoCon All-Tournament Team, as well as the All-SoCon Conference 2nd Team.

Defender: Tianna Harris, Kent State University: Harris recorded 4 goals and one assist in 21 games for Kent State during the 2021 season. She was deservedly named to the All-MAC 1st Team and the MAC Defensive Player of the Year, as well as an All-Midwest Region 1st Team honour.

Defender: Maya Antoine, Vanderbilt University: Antoine started 19 games this past season at Vanderbilt helping the team to an 8-8-3 record and 6 clean sheets. She was named to the All-SEC 2nd Team, as well as the All-Southeast Region 3rd Team.

Defender: Payton Robertson, University of Buffalo: Robertson earned All-MAC 1st Team honours after scoring 1 goal and 1 assist while helping Buffalo to a 13-4-3 record. She was also named to the All-Midwest Region 2nd Team for her performance.

Midfielder: Ciera Lundy, College of the Saint Rose: Lundy was one of the best midfielders in the NCAA D2 last season culminating in NE10 Conference 1st Team, All-East Region 1st team, and All-America 3rd Team honours. She was a staple in the Saint Rose side that were NCAA National Finalists and NE10 Conference Champions, chipping in with 4 goals and 2 assists.

Midfielder: Grace Stordy, University of Memphis: Stordy 4 goals in the AAC for Memphis, including 1 game winner. However, she contributed more than just on the scoresheet, exemplified by earning All-AAC First Team honours.

Forward: Nicole Kozlova, Virginia Tech: Kozlova was an absolute force in the ACC scoring 4 goals, including 3 game winning goals, adding 4 assists. She spread out her team contributions too, scoring or assisting in 9 of the 17 games she played in.
Forward: Emily Mijares, Mercyhurst University: Mijares was one of the most lethal strikers in the NCAA D2 during the 2021 season. She scored 15 goals and 3 assists, leading to being named the PSAC Rookie of the Year, All-PSAC First Team, PSAC Athlete of the Year, All-Atlantic Region Second Team, and CCA All-Atlantic Region First Team.

Goalkeeper: Kayza Massey, West Virginia University: Massey recorded a 10-5-5 record, while earning 10 clean sheets, 0.58 goals-against average, and a 0.813 save percentage. Deservingly, she was named to the All-Big12 Conference 2nd Team.

Defender: Zoe Burns, University of Southern California: Burns was a stalwart at the back for USC starting in 18 games while helping them to a 14-3-3 record and 8 clean sheets. Scoring 1 goal and 1 assist, she was aptly named to the All-Pac 12 Conference 2nd Team.

Defender: Ida Miceli, Niagara University: Miceli earned All-MAAC Conference 1st Team honours after scoring 3 goals and 2 assists from the back line. She was integral to Niagara holding a 13-4-1 record, while keeping 3 clean sheets.

Defender: Taylor Watson, Alabama A&M University: Watson was instrumental in helping Alabama A&M to a 10-8-1 record. During her 17 games played in, 15 as a starter, they kept 9 clean sheets. With 2 assists, she earned an All-SWAC Conference 2nd Team nomination.

Defender: Mackenzie Mix, Niagara University: Mix was Miceli’s partner in crime at the back for Niagara starting 18 games, helping to earn a 13-4-1 record and 3 clean sheets. After contributing 2 goals and 1 assist, she was named to the All-MAAC Conference 2nd Team.

Midfielder: Markela Bejleri, Quinnipiac University: Bejleri started every one of Quinnipiac’s games this past season scoring 5 goals and providing 4 assists as well. Unsurprisingly, she was named to the All-MAAC Conference 2nd Team.

Midfielder: Madelyn Robbins, Farleigh Dickinson University: Robbins was a mainstay in Farleigh Dickinson’s midfield this past season in 20 games. Scoring 1 goal and 5 assists, she was named to the All-NEC 2nd Team.

Midfielder: Mya Jones, University of Memphis: Jones was named to the All-AAC 2nd Team for her performances over the 2021 season. She scored 2 goals, adding 2 assists in 19 games as a starter.

Forward: Jordan Faveri, University of North Carolina – Wilmington: Faveri was essential for UNC Wilmington’s CAA Conference Championship. She scored 5 goals, 4 of which were game winners, chipping in with a whopping 9 assists.

Forward: Emma Davies, Niagara University: Davies was one the most creative players this past season after providing 7 assists, while adding 3 goals. Deservedly, she was named to the All-MAAC 2nd Team.