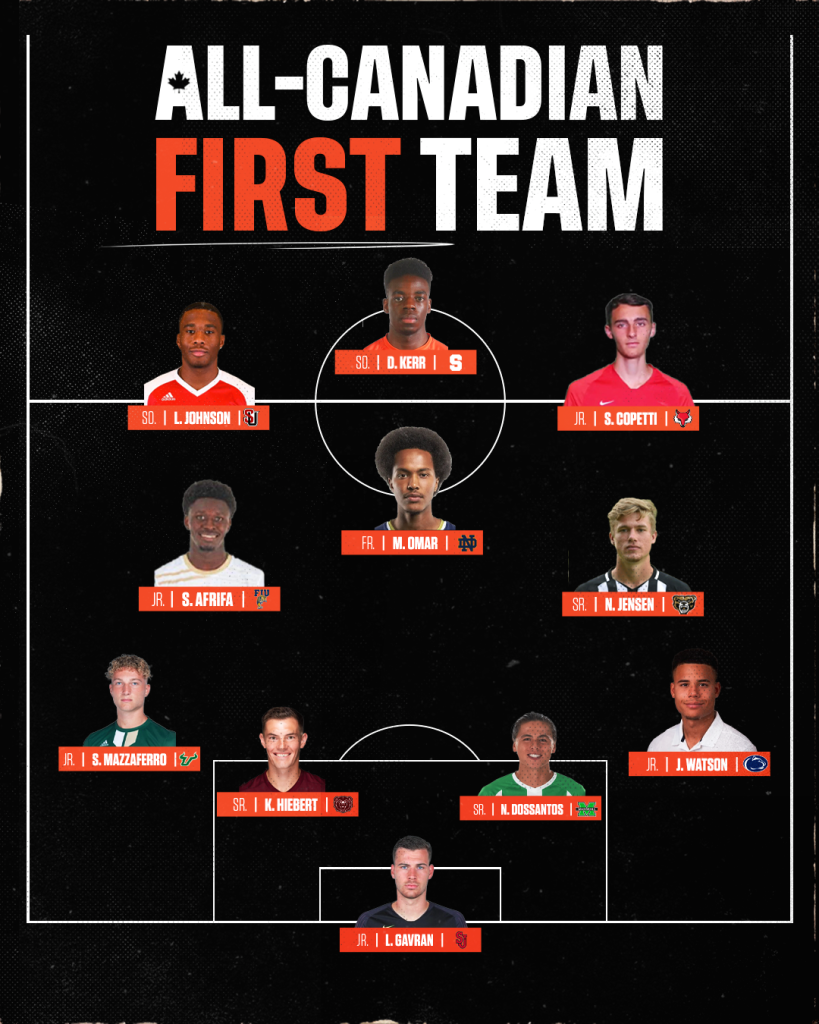 Goalkeeper: Luka Garvan, St. John’s University: Garvan was selected 31st overall in the MLS draft by Toronto FC and signed a professional contract with TFC II after his stellar season in which he was named as a 3rd Team All-American. His individual statistics were equally impressive keeping 12 clean sheets, 0.57 goal-against average, and 0.8444 save percentage while helping St John’s to an 11-6-3 record. Deservedly, Garvan was named to the All-East Region 1st Team, All-Big East Conference 1st Team, and the Big East Goalkeeper of the Year.

Defender: Nathan Dossantos, Marshall University: Dossantos was a mainstay at the back for Marshall helping the squad to an 11-4-3 record and 9 clean sheets. He was named the Conference USA Defensive Player of the Year, All-Southeast Region 1st Team, and All-Conference USA 1st Team. Subsequently, Orlando City SC selected Dossantos 46th overall in the MLS draft and signed a professional contract with USL Championship side Pittsburgh Riverhounds.

Defender: Jalen Watson, Penn State University: Watson earned a regular role in Penn State’s backline through their 2021 season, helping them to a 13-7-1 record along with 8 clean sheets. He concluded his junior season as a BIG10 Conference Champion beating Indiana 3-0 in the final.

Defender: Salvatore Mazzaferro, University of South Florida: Mazzaferro was a stalwart in USF’s backline starting all 15 of their games. He recorded 2 assists and 3 clean sheets, while helping his team to a 6-7-2 record. His performances earned All-AAC Conference 2nd Team honours.

Midfielder: Mohammed Omar, University of Notre Dame: Omar started all 23 games for Notre Dame scoring 4 goals and adding 1 assist. He concluded his collegiate career as an ACC Champion and was drafted 23rd overall in the MLS draft by the Colorado Rapids. Omar signed a professional contract with Halifax Wanderers in the CPL.

Midfielder: Stephen Afrifa, Florida International University: Afrifa was a significant threat from midfield for FIU resulting in All-Southeast Region 1st Team and All-Conference USA 1st Team honours. This came as no surprise after 4 of his 8 goals were game winners, while also chipping in with 3 assists.

Forward: Stephen Copetti, Marist College: Copetti was the key attacking piece in Marist’s MAAC Championship winning season. A starter in 21 of their 22 games, he supplemented the attack with 9 goals, 3 of which were game winners, and 3 assists. For his significant attacking production, he was named to the All-MAAC Conference 1st Team and All-East Region 3rd Team.

Forward: Deandre Kerr, Syracuse University: Kerr was one of the ACC’s most dominant players during the 2021 season. He produced 9 goals and 3 assists in 15 appearances, 13 as a starter. After earning All-ACC Conference 1st Team and All-South Region 2nd Team honours, he signed an MLS Homegrown contract with Toronto FC.

Forward: Levonte Johnson, Seattle University: Johnson was one of the premier attacking threats in all the Western teams of the NCAA. After scoring 9 goals and producing 8 assists, he was named to the All-Far West Region 1st Team and All-WAC Conference 2nd Team. His season culminated in leading Seattle U to a WAC Championship.

Goalkeeper: Omeed Naeemy, Cleveland State University: Naeemy won the starting spot in Cleveland State’s goal during the 2021 season. He started every one of their games this past season producing a 1.81 goals-against average, 0.689 save percentage, 4 clean sheets, and 10-8 record.

Defender: Demarre Montoute, Marist College: Montoute helped Marist to a 12-7-3 record and 9 clean sheets as he started and played in 19 of their 22 games this past season. Logging a ton of minutes in the process, Montoute was a key piece of Marists MAAC Championship side.

Defender: Matt Chandler, St. John’s University: Chandler was a foundational piece on St John’s defensive unit. A starter in all 19 appearances, he contributed significantly to one of the NCAA’s best defenses helping them earn 12 clean sheets and an 11-6-3 record.

Defender: Malcolm Duncan, Providence College: Duncan played virtually every single minute for Providence this past season during his 21 appearances. A starter in all of those games, he was a massive contributor to their 12-5-4 record, 8 clean sheets, and their run to the Big East Championship final. For his significant efforts, he was named to the All-Big East Conference 3rd Team.

Defender: Christian Curti, Syracuse University: Curti was a rock at the back for Syracuse while starting in 16 of his 18 appearances throughout the season. While scoring 2 goals, he also significantly impacted defensively as they recorded 8 clean sheets while posting an 8-8-2 record in the ACC.

Midfielder: Sidney Paris, United States Naval Academy: Paris started in all of his 17 appearances this past season and made the most of them helping Navy to a 12-6-1 record. His 15 points consisted of 4 goals and 7 assists, while deservedly earning All-Patriot Conference 1st Team honours.

Midfielder: Malcolm Johnston, University of Maryland: Johnston captained Maryland this past season and started all 14 of his appearances. While scoring 2 goals and adding 1 assist, Johnston contributed more than on the stat sheet as Maryland finished with a 12-4-2 record and appearing in the ACC quarterfinals. He was an MLS 2022 Combine Selection.

Midfielder: Simon Triantafillou, Providence College: Triantafillou was a creative menace for Providence which meant all opposition had to be aware when he was in possession. He started all 20 of his appearances, while providing 6 assists and scoring 1 goal. After the season, he signed a professional contract with FC Edmonton in the CPL.

Forward: Reshaun Walkes, University of Texas – Rio Grande Valley: Walkes led the line for UTRGV impeccably during the 2021 season as he scored 9 goals, while adding a whopping 7 assists. After being named to the All-WAC Conference 2nd Team, he was selected 59th overall by Toronto FC in the MLS draft. He has since signed an MLS Next Pro contract with TFC II.

Forward: O’Vonte Mullings, Florida Gulf Coast University: Mullings was drafted 20th overall in the MLS draft by the New York Red Bulls. He proved he was one of the best attacking prospects in the NCAA after recording 7 goals and 1 assist in 13 appearances, earning All-ASUN Conference 1st Team and All-Atlantic Region 2nd Team awards along the way. He signed his first professional contract with USL Championship side NYRB II.

Forward: Preston Popp, University of North Carolina – Charlotte: Popp was named to the All-Conference USA 1st Team after scoring 8 goals, 3 of which were game winners, and chipping in with 3 assists in 16 games for Charlotte. After being named to the All-Southeast Region 3rd Team, he signed an MLS Next Pro contract with Rochester NY.

Goalkeeper: Marc Kouadio, University of Dayton: Kouadio was Dayton’s number one choice throughout the season as he played and started in 18 games. He possessed a 1.76 goals-against average, 0.692 save percentage, and 2 clean sheets as he held a 6-9-3 record.

Defender: Habib Famuditimi, Jacksonville University: Famuditimi found his way consistently in Jacksonville’s starting eleven as he played in 13 of their 14 2021 season games. Starting 11 games, he helped his side to 3 clean sheets.

Defender: Deylen Vellios, Ohio State University: Vellios was a steady presence in Ohio State’s backline. The Buckeye’s 6-9-1 record may be a red herring as Vellios was a key contributor to 2 clean sheets and 1.5 goals against average over the course of the season.

Defender: Saahb Kular, Cleveland State University: Kular was a stalwart in Cleveland State’s backline starting all 16 of his appearances. He was a significant contributor helping the side to a 10-8 record, while keeping 3 clean sheets. He scored 1 goal during his junior year, and a game winner to boot.

Midfielder: CJ Smith, Houston Baptist University: Smith was fantastic for Houston Baptist for the duration of his senior season. A starter in all 17 games, he scored 5 goals, while contributing 3 assists. After the season, he signed his first professional contract with Halifax Wanderers in the CPL and has since been loaned to fellow CPL side FC Edmonton.

Midfielder: Gabriel Mikina, Niagara University: Mikina made the most of his time on the pitch starting in 10 of Niagara’s 17 games. Despite as many minutes as most of the other players on this list, he significantly contributed to Niagara’s attack scoring 4 goals, while adding 2 assists.

Midfielder: Charles Auguste, Creighton University: Auguste was a regular in Creighton’s midfield starting 18 of 19 games, while scoring 1 goal and chipping in with 2 assists. Contributing in more ways than show up on a stat sheet, he was aptly named to the All-Big East Conference 3rd Team.

Midfielder: Joshua Pulla, St. Bonaventure University: Pulla regularly started for the Bonnies and was one opposition defenders had to be weary of attacking from midfield. He scored 7 goals, including 1 game winner, as well as recording 2 assists.

Forward: Jacen Russell-Rowe, University of Maryland: Russell-Rowe certainly made the most of his two seasons at Maryland. He contributed with 2 goals and 5 assists in his sophomore year which led to a professional contract Columbus Crew 2 in MLS Next Pro.

Forward: Nathaniel St. Louis, University of Alabama – Birmingham: St. Louis started in 14 of his team’s games scoring 5 goals and adding 1 assist. He was a consistent threat in his conference culminating in being named to the All-Conference USA 2nd Team.