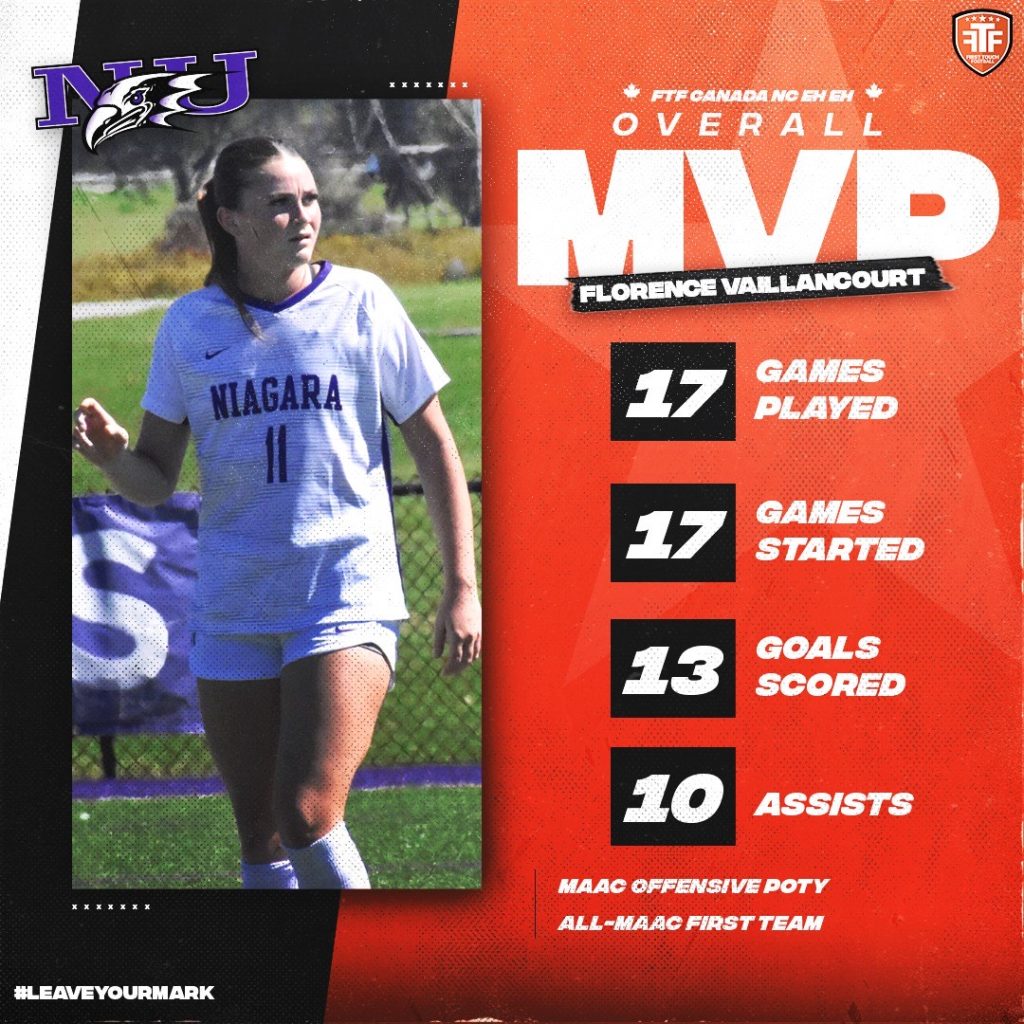 FTF Canada announced the 2021 NC EH EH All-Canadian Teams, with Niagara University’s Florence Vaillancourt being voted Player of the Year recording a staggering 13 goals and 10 assists in 17 games for Niagara University in the MAAC.

Amanda West was named Attacking MVP after registering a staggering 10 goals and 3 assists in only 11 ACC games. Julio Grosso was named Midfielder MVP producing 6 goals and 4 assists and being named to the United Soccer Coaches All-America Third Team. The Defender MVP was awarded to Gabrielle Carle as she recorded 3 goals and 6 assists for the NCAA DI 2021 National Champion Seminoles. Marika Laurendeau was named Goalkeeper MVP after helping guide her team to a NCAA DII National Championship, while also being lone goalkeeper to be named in the United Soccer Coaches All-America First Team. Finally, the Freshman MVP was awarded to goalkeeper Camellia Xu who possessed one the best seasons for all goalkeepers in the NCAA, setting some school records in the process.

Player of the Year: Florence Vaillancourt, Niagara University: The junior hailing from Quebec City racked up 36 points during the season which ranked 13th in the entire NCAA. Vaillancourt scored 13 goals, including 5 game winning goals, while adding 10 assists. She ranked 18th overall in goals and 26th overall in assists for the NCAA. In 17 games, Vaillancourt registered two hattricks and 8 multi-goal/assist games during the season. Incredibly, there were only 5 games in which she did not register a point. Niagara was 1-3-1 in those games compared to 11-1 when she registered a point speaking to her vitality to Niagara’s 13-4-1 record and a MAAC Tournament Finals appearance. Fittingly, Vaillancourt was named to the All-MAAC First Team and crowned MAAC Offensive Player of the Year.

Attacking MVP: Amanda West, University of Pittsburgh: The Burlington native only featured in 11 games this past season yet registered 10 goals, while adding 3 assists adding up to 23 points. Incredibly, she had a point-per-game ratio of 2.09, 5 game winning goals, while tallying 4 multi-goal/assist games. West was named in the All-ACC Third Team and All-Atlantic Region Third Team. Her season culminated in a callup to the Canadian Women’s National during the November 21 – December 01 FIFIA Window.

Defender MVP: Gabrielle Carle, Florida State University: 2021 was Gabrielle Carle’s year and we were just living in it! A 2020 Tokyo Olympic Goal Medal in August was followed by an NCAA National Championship in December. The Levis, Quebec native scored 3 goals while adding 6 assists in her senior season. A stalwart at the backline starting in 23 of 24 games, Carle helped the Seminoles to a 22-21-2 record and was named to the All-ACC Second Team. She finished 2021 by signing for Kristianstads DFF in Sweden’s highest division of women’s football.