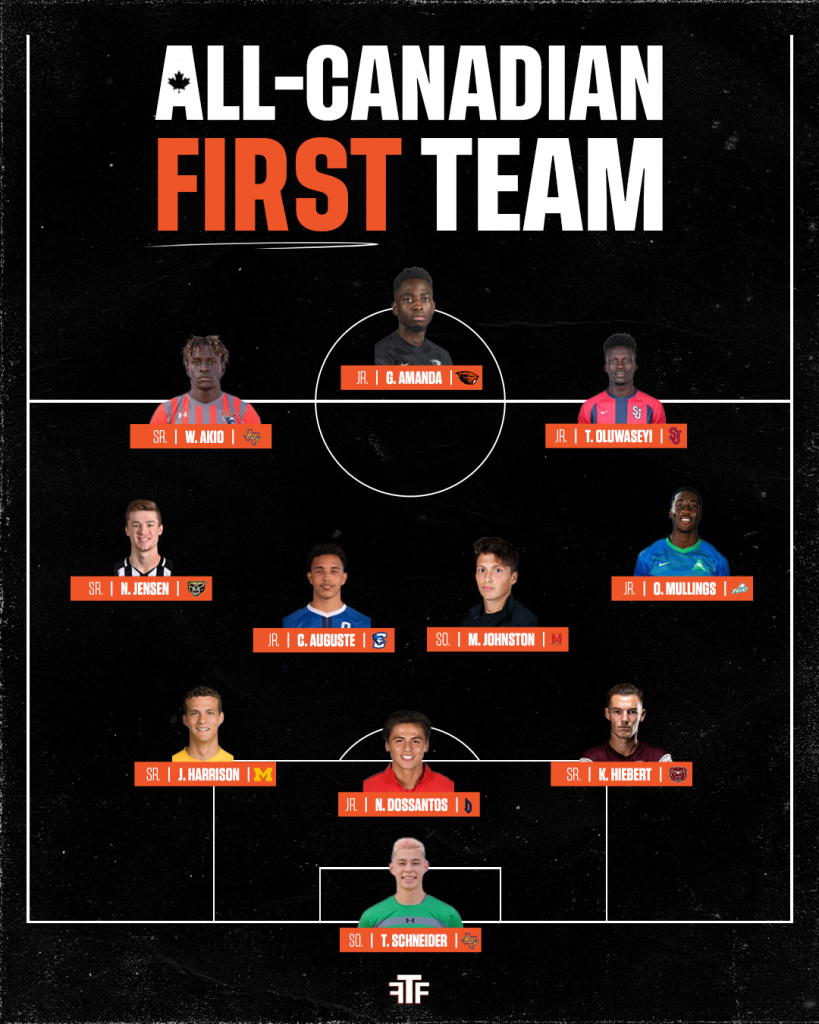 The 2021 FTF All-Canadian Best Eleven has just arrived, and this year’s list is loaded with talent. Every year, the talent pool of Canadians competing in the NCAA is growing, making the job of selecting just eleven players an increasingly difficult task. All in all, our team of talented evaluators have done a tremendous job in narrowing down their search of top talent to create an accurate list of athletes.

In this article, you will find the FTF NCAA Best XI First, Second and Third team selections of the top Canadian players competing in the NCAA.

Sophomore Goalkeeper Trevor Schneider put together an unbelievable bounce back season in 2021 for the University of Texas Rio Grande Valley. The Coquitlam, BC native started all 9 contests, recording 37 saves, a 0.84 goals against average and .818 save percentage, all of which were good for second in the Western Athletic Conference. Schneider was selected for the All-WAC second team.

Canadian Center back Nathan Dossantos was a dominating presence in the back four for Marshall University in 2020/21. The Sigma FC product was selected to the All-Conference First Team after being named defensive player of the week three times throughout the 2021 season. In Thirteen Games played, Dossantos registered one goal and two assists while also contributing to three clean sheets

Two-time MVC Defensive Player of the Year Kyle Heibert is more than deserving on a spot on the NCAA All-Canadian First team. Heibert was named to his second consecutive selection as a member of the All-MVC First Team for his performance as captain of Missouri State University. The Manitoba native led MSU as a captain for 65 straight matches, including five clean sheets in 2021 and is currently rated as No.13 on Top Drawers Top 100 Upper-Classmen Rankings.

Senior Joel Harrison, who was selected 53rd overall by the Vancouver Whitecaps in the 2020 MLS Super Draft is ending his collegiate career off with a stellar season. The Langley, B.C. native was selected as a member of the First Team All-Big Ten as well as the Academic All-Big Ten Team in his senior season. Joel is one of those players who will continue to put Canadian soccer on the map as he progresses throughout his professional career.

FGCU Forward O’Vonte Mullings picked up where he left off as a Sophomore to put together a productive Junior season for the Eagles. The 2019 ASUN First Team Selection played in nine games in 2020/21 registering five goals and ten points. After winning the 2019 All-Atlantic Region Player of the Year, Mullings is currently ranked as No. 80 on the Top Drawer Top 100 Rankings.

Junior Charles Auguste tore up opposing midfielders in the Big-East this season. The midfielder from Montreal, Quebec recorded three goals and four assists in eleven games player in 2020/21. Auguste was selected to the All-Big East Second Team after finishing 8th in the conference with ten points.

Midfielder Noah Jensen had a season for the record books. The 2021 Horizon Player of the Year led the nation in assists with fourteen, and assists per game averaging 1.56 assists per contest. Meanwhile Jensen also finished fourth in the nation in points with twenty-two, averaging 2.44 points per contest. The Oakland Captain was named to the All-Horizon First Team as he was able to record four goals to go along with his fourteen assists in order to cap off a tremendous collegiate career. Jensen was ranked No.24 in the Top Drawer Top 100 Rankings on April 9th, 2021 and he is also eligible for the upcoming 2021 Super Draft.

Canadian Forward Tani Oluwaseyi picked up where he left off last season in order to put together an impressive 2020/21 campaign. Appearing in nine games for the Red Storm, Tani had thirteen points with five goals and three assists. Tani was selected to the All-Big East First team for the second consecutive season, after earning 2019 Big East Offensive Player of the Year honors with eleven goals and five assists last season. The Mississauga, Ontario native is currently ranked 39th on the Top Drawer Top 100 Upper-Classmen.

What else can be said about the WAC Offensive Player of the Year William Akio. The prolific forward scored seven goals including three game winners and two assists in nine starts for the Vaqueros. The seven goals were good enough for first in the WAC while William also finished first in points with seventeen.  Akio is currently rated No.82 on the Top Drawer Top 100 Rankings. The All-WAC First Team selection is more than just a footballer, check out Williams popular Youtube channel with over 15 thousand followers: https://www.youtube.com/channel/UCZOkgNnKqakIyiymQelPotQ .

Ranked No. 1 on the Top Drawer Top 100, Glorie Amanda is one of the brightest young stars in Canadian soccer. Playing in a professional environment since the age of fifteen, Amanda was destined for greatness as soon as he hit the ground running at Oregon State. Amanda started thirteen games for the Beavers, leading the nation in scoring with fifteen goals and seven assists good enough for thirty-seven points. The sky is the limit for this bright young star.

FW- Ronaldo Marshall (So., Boston U.)

Goalkeeper Rimi Olatunji was stellar in goal for the Bruins this season. The Redshirt Junior started in nine games for Providence, recording four clean sheets, a 0.90 GAA and .789 save percentage. This is a major turnaround for the Brampton, Ontario native who played in only two games in 2019.

After putting together an impressive 2019 campaign, Saahb Kular had a wonderful season for Cleveland State University. The Vaughan SC product starting in nine games for CSU recording two assists and contributing to four clean sheets in 2020/2021.

Canadian Defender Jalen Watson had a solid season for the Nittany Lions after earning a spot on the Big Ten All-Freshmen Team in 2019. In 2021 Watson appeared in nine matches for Penn State, recording one goal and contributing to two clean sheets.

A second round selection in the 2021 MLS draft, Matt Constant was a pillar on the backline for UNC in 2020/21. The six foot six centerback has made a name for himself, stopping even the most prolific strikers during his time playing for the Tar Heels in Chapel Hill. Constant started seven games due to a shortened season in 2020/21 including a game against Duke on October 2nd where Constant scored the game winning goal. On April 28th Sporting KC of the USL announced that they had signed Constant to an entry-level contract and he will join the team’s roster upon league approval.

TFC Academy Product Brayden Borutskie has made a name for himself as a productive center back for Liberty. After starting in fourteen matches as a Freshmen, Brayden appeared in twelve games for Liberty helping the team secure eight clean sheets while also registering one goal on the year. The future is bright for the 6’2’’ Bradford, Ontario native.

Defender Sal Mazzaferro was a force in the back line for USF this season. Starting in all ten games as a vocal leader Bulls, Mazzaferro scored one goal this season. Mazzaferro, who spent time with the Toronto FC Academy as a youth, was named to the AAC All-Rookie Team in 2019 and has looked like rising star ever since.

Canadian Junior Preston Popp was a beast this season in the midfield for UNC Charlotte. Popp won the All-Conference USA Co-Golden Boot after scoring five goals in total including three game winners. The All-Conference USA Second Team selection was chosen as the Conference USA Offensive Player of the Week twice: March 9th and April 13th.

Sameer Fathazada from Toronto, Ontario has found himself filling up the stat sheet more often than not in his three seasons with Fordham. In nine appearances in 2021, Sameer finished with three goals, two assists and eight points helping Fordham to their fourth Atlantic Ten Men’s soccer championship.

Unionville Ontario native Ben Williams found the back of net more often than not in his six games played this season for Bryant University. The Bill Crothers Secondary School Graduate scored four goals good enough for eight points in 2020/21. The two-time Winstar Showcase MVP has not disappointed in his three seasons with Bryant.

The Woodbridge SC product Ronaldo Marshall was a force for the Terriers in 2020/21 after transferring from FIU. The Mississauga, Ontario native was named to the Patriot League All-Conference Team after leading the league with eight points averaging 2.0 per game. Marshall also led the Patriot League in scoring with three goals scored, meanwhile he finished second in assists with two on the season.

Canadian Goalkeeper Josh Savoni had a solid campaign in goal for Niagara University. In, eight starts, Josh accumulated thirty-seven saves with a .804 save percentage. Josh led the Purple Eagles to five wins in his eight starts including three shutouts.

After starting all eighteen games as a Junior, defender Malik Smith played and started in twelve games for Liberty in 2020. The Business Administration major was a key fixture in the back line for the Flames, contributing to two clean sheets on the season.

Surrey, B.C. native Brendan Skinner finished his collegiate career with an impressive season for the Western Michigan Broncos. Starting in all nineteen games for the Broncos helping the team to two clean sheets and six wins in 2020/21.

Canadian Defender Elyad Shojaei, whose family relocated to Vancouver after originally being born in Tehran, Iran was a fixture on the back line for the University of Texas Rio Grande Valley. Elyad was selected as a member of the All-WAC First team after appearing in ten games recording a goal and an assist. Elyad helped the Vaqueros secure three clean sheets in his ten matches played.

Barrie, Ontario native Jordan Acevedo had a very strong senior season in 2021 as Team Captain for the Purple Eagles. Acevedo played in eight matches for Niagara this season, recording a goal and an assist. Acevedo’ only goal of year was a game winning goal against Saint Peter’s on April 3rd. Jordan was named to the All-MAAC Team for his stellar season in 2021.

Woodbridge SC product Ryan Khedoo had a very productive season for the University of Missouri Kansas City. Khedoo, who was selected as a member of the 2021 All-Summit Second Team registered a league leading five assists for the Roos, and a goal against Western Illinois on April 1st.

Canadian Forward Nigel Buckley was an offensive force for Lasalle University in 2021. Playing in nine games for the Explorers, Buckley had three goals and six points. The Pickering, Ontario native will look to build off of his strong Junior season in 2022.

Canadian Forward Reshaun Walkes was a clinical goal scorer for UTRGV this season. In eight starts for the Vaqueros, Walkes found the back of the net five times allowing him to amass ten points in 2020/21. Walkes was selected as a member of the All-WAC Second Team after tying for second in the conference in goals scored.

A member of the Conference-USA All-Academic Team, Brock Lindow is a star on and off the field for the Wildcats. In twelve games played for the Wildcats, Lindow recorded four goals including a massive game winning goal in the 96th minute against Central Arkansas.

Forward Omari Cotterell from Pickering, Ontario has been a key fixture on offence since his Freshmen season in 2018. Cotterell finished the season tied for third on the team with three goals and an assist equalling seven points on the season. The All-Conference Second Team selection scored the game winning goal against Villanova on February 13th, 2021.