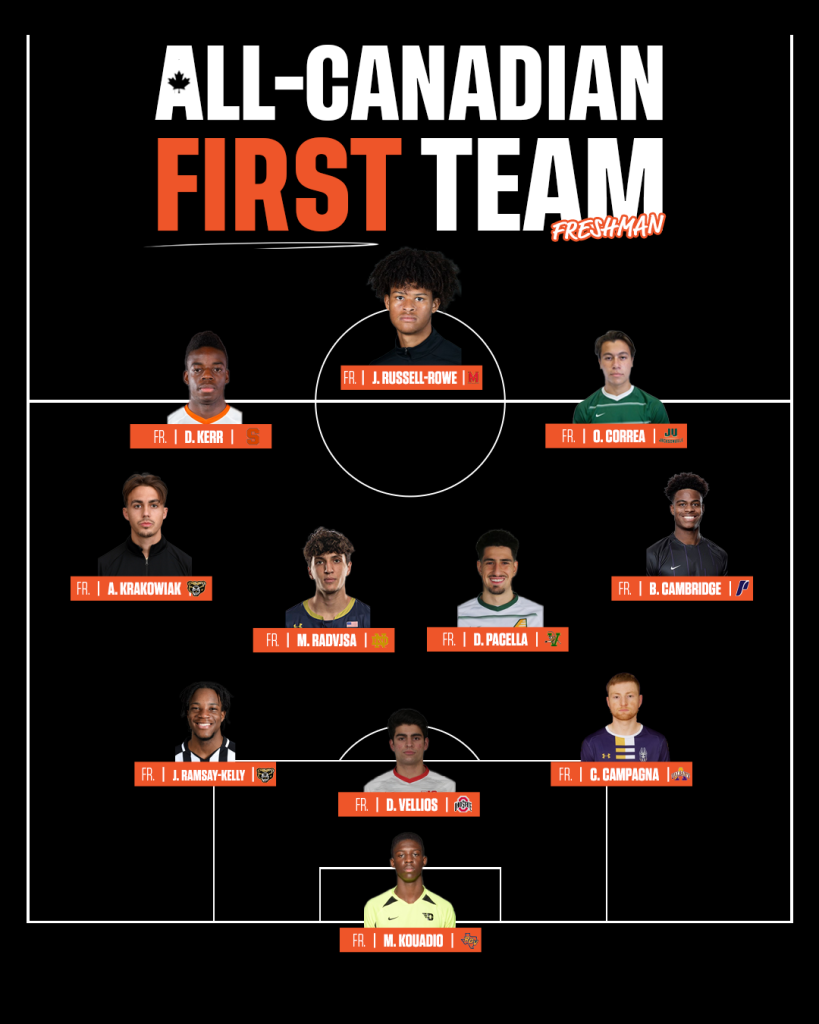 This year’s class of Canadian Freshmen who are competing the NCAA is elite. All of the players on this year’s NCAA All-Canadian Freshmen Selections presented by FTF have a future in which Canadian soccer fans should be very excited about. This list is stacked with prolific goal scorers, high level goaltenders and talented players who hope to improve on a successful Freshmen season as they progress through their collegiate careers.

Canadian Goalkeeper Marc Kouadio was rock solid in goal for Dayton in 2021. The Freshmen from Montreal, Quebec played in nine games this season, finishing with forty-one saves, twelve goals against and a 0.774 save percentage. Kouadio is definitely one of the top young Canadian net minders.

America East All-Rookie of the Year selection Cristian Campagna was a key fixture on the back-line for Albany. The Surrey, British Columbia native appeared in all nine games for the Great Danes and helped the team to a clean sheet against Saint Rose on March 19th.

Defender Deylen Vellios was a key addition for Ohio State in 2021. Vellios played in nine games for the Buckeyes, contributing two assists and helping the team to two clean sheets in his Freshmen season. The sky is the limit for the Whitecaps FC product.

Freshmen Jaiden Ramsey-Kelly had a decorative youth career playing for the Woodbridge Strikers, and seems to be destined for similar success with Oakland. The defender from Brampton, Ontario played in eight games for the Golden Grizzlies and was selected as a member of the Horizon League All-Freshmen Team.

Canadian Midfielder Brandon Cambridge was a clinical goal scorer for Portland in 2021. The Whitecaps Academy graduate scored four times on the season, adding two assists which was good enough for ten points on the year. Cambridge is looking like a future star for the pilots.

America East Rookie of the Year Daniel Pacella from Montreal, Quebec has the future of Vermont Men’s soccer looking bright. The America East All-Conference Second Team selection started in eight games in 2021, seemingly controlling the midfield for Vermont every time he touched the pitch.

Oakville, Ontario native Matthew Radivojsa had an impact in all seventeen games for the Fighting Irish in 2021. The former member of the Toronto FC Academy had one goal on the season for Notre Dame.

All-CAA All-Rookie Team selection Alek Krakowiak was a mainstay in the midfield for James Madison this past season. In eight starts for JMU, Krakowiak registered one assist and helped the team secure five victories.

Freshmen Oliver Correa began his collegiate career off with a bang in 2021. The ASUN All-Conference First Team selection appeared in all nine games for the Dolphins in 2021, amassing twelve points on the season with five goals and two assists. Correa is currently rated as the No. 50 Freshmen in the Nation according to Top Drawers Top-100 Freshmen list updated April 9th, 2021.

The Terps definitely found themselves a gem in Canadian Forward Jacen Russell-Rowe. The Big Ten All-Rookie Team selection, is a proven finisher with a knack for finding the back of the net. Russell-Rowe had two goals in 2021 for the strong Maryland side.

Deandre Kerr from Ajax, Ontario had a productive Freshmen season for Syracuse. The prolific Forward appeared in 12 games for the Orange, scoring four goals and eight points on the season. Kerr was selected as a member of the ACC All-Freshmen Team and will look to build on this impressive season moving forward.

Langley, British Columbia native Nolan Premack was stellar in his appearances for California Baptist in 2021. Premack made four key saves and only conceded one goal against in his two games this season. He recorded his first ever NCAA clean sheet in a 5-0 victory over Dixie State.

Vaughan SC product Nathaniel Edwards played a major role for the Mastodons in his Freshmen season. Edwards was featured in the starting lineup on nine occasions helping the team record two clean sheets on the year. The Freshmen was one of two players to start every game of the season for the Mastodons

Syracuse is one of those Universities who love their Canadian athletes and it looks like they got a good one in Freshmen Olu Oyegunie. Oyegunie appeared in seven games in 2021, leading the Orange to two clean sheets in his seven matches played.

Long-time teammate of fellow Canadian Freshmen Nathaniel Edwards, Simpson has been solid defender ever since his youth career with Vaughan SC. The Communications major played in seven matches for the Mastodons in 2021, recording a goal and an assist for three points on the season.

Freshmen Jeremy Opong from Brampton, Ontario was a beast on the pitch for Fairleigh Dickinson this past season. The All-NEC Second Team selection started eight games for the Knights, registering one goal. Opong was also a member of the NEC All-Rookie Team.

A long-time member of the prestigious Toronto FC Academy, Joshua Moreira has a bright future with the Dolphins. Moreira appeared in nine games for Jacksonville in his Freshmen season playing a major role in the midfield. The midfielder from Toronto, Ontario scored the game winning goal against North Florida on April 3rd.

Pickering, Ontario native Darius Kerr-Cooper had a very productive season in his first year with Florida Gulf Coast. Kerr-Cooper played in nine games for the Eagles recording one goal and two assists totaling four points on the season.

After a long competitive youth soccer career with North Toronto, Forward Asher Barnes was a problem for opposing back lines in his first season with Niagara University. Barnes finished the season with four goals and eight points in seven appearances off the bench for the Purple Eagles. Barnes was awarded the MAAC men’s soccer Co-Rookie of the Year for his efforts this season.

The 2019 CCAA Player of the Year Jared Leheta could not be stopped in his first season with East Tennessee State. Leheta appeared in all eleven games, finishing the season with a team leading twelve points because of six immaculate goals scored. Leheta will continue to lead a potent offensive force for ETSU in upcoming seasons.